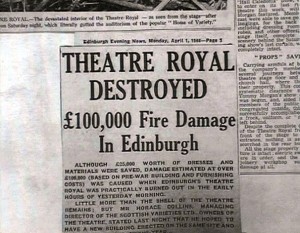 Disaster struck at midnight on Saturday 30th March 1946 when the Theatre Royal Edinburgh, the fourth theatre on the Broughton Street site, was gutted by a fierce fire. The fire was spotted by the night watchman who kept it in control as best he could until the Fire Brigade arrived. The fire started in the gallery and the watchman, Mr Walter Fraser who was 56 years of age at the time, dropped from the gallery handrail into the upper circle twenty feet below to continue the fire-fighting. His action helped to cut off the fire from the stage and dressing rooms. The safety curtain had been dropped at the end of the performance just 40 minutes prior to the fire starting and there had been 1,500 people attending the show.Thousands of pounds worth of dresses and materials were saved. It took five detachments of firemen to bring the fire under control and at one stage the flames leapt to a height of 40 feet above the top of the building and needless to say, the roof collapsed. People were evacuated from their homes in the immediate vicinity. 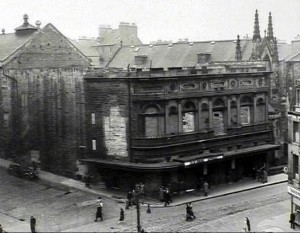 On investigation, it was thought that a cigarette dropped in the circle was the cause which finally gutted the auditorium. The show in residence that night was “Hail Caledonia” with Tommy Morgan and the Stage Manager, Mr A. Gibson, praised the company for the efficient way in which they removed the ‘props’ and stated “Not a frock, uniform or ‘prop’ was left”. Although fully insured at the time, it was impossible to obtain a permit for building materials as all such were strictly reserved for housing projects after the war. Plans for a new theatre were drawn up by Basil Spence, later to become Sir Basil who was the Architect of the new Coventry Cathedral. These plans were for a sumptuous up-to-date theatre with a slightly smaller capacity to suit modern conditions. 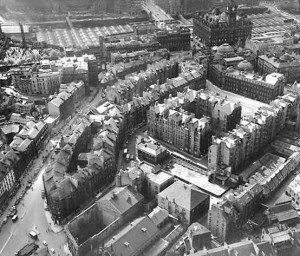 The post-fire shell of the Royal, Edinburgh, base centre courtesy of Edinburgh Evening News

However, by the time permission to rebuild was granted, after the death of Horace Collins, costs had risen so much that it was impossible for his heirs to raise the finance and the Royal remained a shell until its demolition in the late 1950’s. In the interim, the backstage area continued as a scenic workshop presided over by artist Bill Grayson and as a theatrical workshop presided over by Miss E. Cooke, all overseen by Mr. A.J. ‘Bumper’ Wark, the erstwhile House Manager, who had been with the Collins set up since the time of Fred Collins. Perhaps had Horace lived beyond 1947, the outcome would have been different.