Like his father before him, Horace was possessed of a dominant charismatic personality and he had many friends from all walks of life. Following in his father’s footsteps he found time to raise large sums of money for various charities and he was the first person to organise matinees for the unemployed during the depression of the 1930’s. He gifted a mobile surgical unit to Edinburgh and his charitable interests included: The Newspaper Press Fund, The Queen’s Institute of District Nursing, Leith Hospital; Edinburgh’s Infirmary, The Sick Children’s Hospitals of both Glasgow and Edinburgh, The Variety Artistes Ladies Guild and Orphanage, The Salvation Army, The British Sailors’ Society, Jock’s Box Glasgow, The British Red Cross, The Prisoners of War Funds, The Blood Transfusion Service, The St Andrew’s Ambulance Service and The Aid to China Fund. All of these are on record and during the war years alone, he raised over £30,000 (Over a million pounds today) – a great deal of money in these dark days. 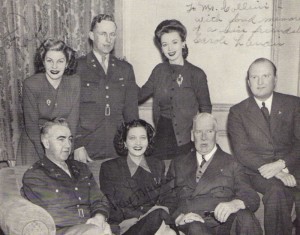 By the outbreak of war in 1939, Horace had become easily the pre-eminent personality on the Scottish Theatrical scene. All Theatrical Agents were members of an association and were well known to each other and the Fred Collins Variety Agency was easily the biggest in Scotland and was the sixth oldest in the U.K. 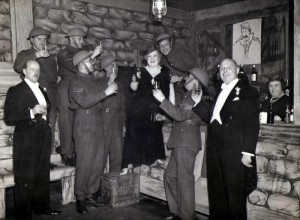 It was inevitable, therefore, that he was appointed Scottish Regional Controller and Chairman of Entertainments National Service Association (ENSA) for the duration of hostilities. Granted the rank of Colonel to allow him to move with unimpeded authority through service camps, he was responsible for an average of 1,630 performances per month to aid the war effort and these duties he carried out on a voluntary basis from his office in Renfield Street, Glasgow, without payment or expenses. The object of these performances was to bolster the morale of the armed forces, the Merchant Navy, Munition Workers, Dock Workers, Hospitals etc he also despatched parties overseas to entertain the Scottish troops whilst abroad. In 1944, Jack Anthony and his company which included Bond Rowell and Bertha Ricardo, were sent fairly near the front-line and Bertha especially, found this a most harrowing time but rewarding due to the reception they were given by ‘the lads’. All artistes were kitted out in uniforms which they insisted would be of the finest material to easily distinguish them from the ranks. The Collins children received many souvenirs brought back from war-torn Europe the most gruesome being a Japanese flick-knife! It may be of interest to recall that Butlins Holiday Camp at Ayr, which is today Craig Tara Holiday Park, was requisitioned by the Navy as a large naval base called ‘Scotia’. Many of the Agency’s top artistes entertained there including the Henderson twins, sisters of Dickie Henderson who went on to compare the “Sunday Night at the Palladium” TV show and many others and again 16mm film of ‘Dickie’s visit to Ayr still survives. Pete Collins, also served the country during the war years. He was given the rank of Captain and was in charge of ENSA operations overseas while based in Ireland. During this time Pete looked after many glamorous US entertainers such as Bob Hope, Carole Landis, Gertrude Lawrence and Al Jolsen. 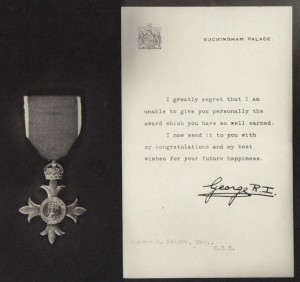 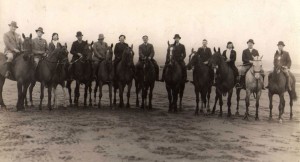 It was not surprising that Horace’s name was put forward by his peers for recognition by the King in both 1945 and 1946. Although on both occasions the submission was that he be knighted, the post-war Government could only see their way to award an O.B.E in 1946. Despite the tremendous burden of running both the Agency and his commitment to ENSA, twins Judy & Jill were born into the family in September 1940 and Horace felt it might be best to buy a house out with Glasgow where his young family could be safer than they were in Dumbreck which was only a stone’s throw from the docks in Glasgow, a prime target for German bombers. He chose Ayr and from then until the 1960s the family travelled to Ayr for many holidays and at weekends. Ayr was near enough for Horace to get to the Glasgow office from quickly, if required. 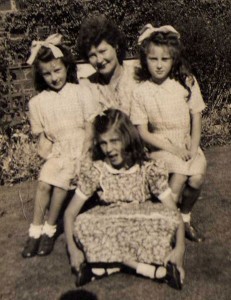 Horace’s mother Annie lived in a large house in Pollokshields called ‘Milverton’. At the beginning of the War Horace decided that the house could be better used and donated it to a nursing organisation.  Annie came to live with the family in Dumbreck and remained with them until her death in 1952.

In the mid 1940’s, when the Pavilion pantomimes were a highlight in the calendars of a great number of Glaswegians, Collins Productions would open in early December and run to packed capacity through until Easter. This would be followed by a Spring Show starring artistes like Jack Radcliffe or Alec Finlay. A production of similar type would take place in the Autumn.