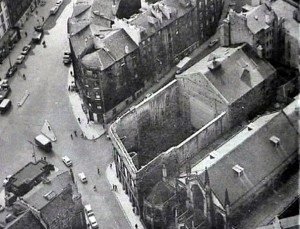 “Near the beginning of my employment it was decided to make an inventory of all the costumes and accessories accumulated by us over half a century. I was seconded to our Edinburgh wardrobe mistress, Miss E Cooke, for nearly three months lugging and listing thousands of outfits of all kinds so that they could be located at will for the first time in decades. Some had been specially tailored for our productions but others were absolutely authentic uniforms and dresses of all kinds and if we still had them today, I imagine I would be one of any TV Producers favourite sons! Alas, some five years later we sold the lot as we had nowhere to store them. Our store was a block of about six large flats forming the rear of the fire damaged Theatre Royal, Edinburgh. The Royal site and its appendages were sold to the adjoining St. Mary’s Roman Catholic Cathedral which bought us out, or so it was rumoured, because they had constructed crypts beneath our mutual gable wall. Soon afterwards the Cathedral sold off most of the site to the Edinburgh City Council retaining a small area just beyond the gable as a garden of remembrance – so who knows, I don’t!The back stage area of the Theatre Royal, Edinburgh became our scenic workshop after the fire in 1946 and was presided over by Mr Bill Grayson, a genial and talented artist who was aided by squads of joiners and general handymen as productions demanded. Up to the mid 1950’s shows were much heavier in scenery than they are today when the accent is more on lighting and costumes and Bill was kept hard at work all year round. I recall there always seemed to be last minute alterations right up to the dress rehearsal in all productions and I never ceased to be amazed at the difference coloured lighting could make to a finished set. One of our company producers was so fond of magenta that he became known to the limesmen as “Mr Maginty” His name was Jay Morelle and he had been loyal since the 1940’s.”

When the scenery studio and wardrobe were created they had to be staffed. During the time ‘Collins’ owned the Edinburgh Royal every member of the permanent staff became part of an extended family and they were all very concerned with the best interests of their theatre. When a vacancy arose, another employee would often suggest someone suitable to fill the position and the system worked very well as everyone pulled together. At that time there were no unions but everyone got along with good sense and camaraderie. When a wardrobe mistress was first required the musical director Mr Fox suggested his wife ‘Gladdy’ who stayed until the disastrous fire of October 1946, ruling her own little empire very successfully, hiring and firing as demand waxed and waned. When she retired her place was taken by Miss E. Cook who did the same job with equal aplomb until the site was sold. The wardrobe was closed in the mid 1950’s. By that time the collection numbered many thousands of items.

Another interesting character was Mr A.J. ‘Bumper’ Wark.  Bumper was a major in the Indian Army and when he took retirement at the end of the 30’s he decided to try theatre management. He approached Horace, and when asked what his idea of salary was he offered to work for a month gratis and only then would they talk money. He then became manager of the Royal, quickly becoming an Edinburgh ‘worthy’ until the fire of ’46, then, rather than seek a new host offered to upgrade the managerial systems at the other ‘Collins’ theatres. This was short term and it was decided that he would front the scenic and wardrobe departments to free up Bill Grayson and Miss Cook from the paperwork which was becoming onerous. He remained until the business closed.

In the final few years of trading ‘Collins Productions’ rented complete productions and individual costumes etc to other managements including amateur companies and also as fancy dress to the public. The assets of both departments were sold George Urie Scott of the Glasgow Pavilion but within a very few years were resold and sadly dispersed.