Since around the early 1940’s Randle had been trailed around the halls to observe and hopefully soak up the atmosphere and no one had ever contemplated that he would do anything but follow-on. Randle admitted that he was in no way displeased at this prospect and perhaps even slacked a little at school knowing that his career was assured.

However, when at 17 years of age he finally joined the ‘firm’, even to one as raw as he, it was quickly obvious that all was not well : “I was handed 30/-d a week and left to learn by watching and helping my senior”, he remarked. In retrospect, he doesn’t think anyone knew quite what to make of him. Their callow saviour!  Randle adds: “it wasn’t too difficult to see what was wrong and how it should be tackled, but doing it was quite a different matter.”

When asked about his time in the business, Randle’s reply was as follows:- “I can hardly regret my few years in theatre land as in many ways it was for me a most enjoyable time. There  I was, a youth, the ‘heir apparent’ to one of the most respected theatrical businesses in Britain and no outsider knew the true, perilous state of our affairs. Consequently, wherever I went, I was treated with a deference which was exceedingly flattering and wholly undeserved for one of my tender age!

Throughout Britain I had only to present myself at any theatre in the country to be made most welcome. Ostensibly to view and assess the current show, I would be ushered into the best seats by people who were by far my seniors in experience but who thought my influence might some day work to their advantage. Most of them were genuinely nice people and those who were not, still felt it prudent to at least be deferential. In our own backyard, Scotland, I think some of them latterly had their suspicions that all was not well, but when I went to England, their ignorance of affairs north of the border, made them really roll out the red carpet! “I knew your Father and even Grandfather” was the oft quoted cry which always preceded an effusive welcome and hospitality to match.  Almost to a man they were very kind and did everything they could to make my visit enjoyable which anyone must realise made for a very pleasant existence.” 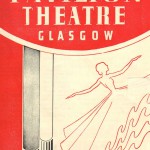 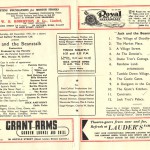 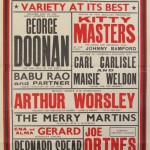 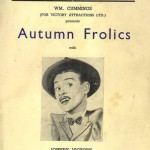