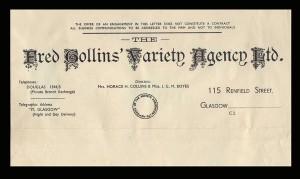 Initially she assumed the mantle of Managing Director of all the Collins limited companies and promoted an aide of Horace’s to be her General Manager. Unfortunately it took several years for her to discover that her choice was flawed and that he was not working in the best interests of the Organisation. At that point he was replaced by Jim Bennett who had started with the firm as office boy only to have his service interrupted by the 1939-1945 second World War which he mostly spent as a Japanese POW in the far- east. As did many, he returned weighing half his normal weight, but quickly slotted back into the old routine. Jim strove manfully to keep things going but he was fighting a losing battle.Meantime, Josee was discovering that she could not persuade directorates to stay in line and in rapid succession, she lost the managing directorship of the Tivoli Theatre, Aberdeen and the Palace Theatre, Dundee. Due to the Collins’ substantial shareholdings in both these theatres, she remained director but as she neglected the obligations which are part and parcel of that office, she quickly lost all influence and not surprisingly, the booking rights. The other directors of each of these theatres felt that they could make greater short-term profits without having to pay for traditional ‘Collins’ quality This they did by using the ‘expertise’ of on-the-spot individuals who were quite capable of handling the day-to-day running of the halls but with little thought to the longer term consequences. Both theatres soon went into decline and eventually closed – but the important thing for the Collins Organisation was that they had lost the means to groom Scottish Artistes for the future as they no longer had a ‘four season circuit’. If you do not have profitable venues for your productions, you cannot produce and if you cannot employ, you cannot collect commissions which was the Collins’ life blood and so the Company slowly wasted away. Collins’ demise was prolonged because it held controlling interests in the Shakespeare Theatre, Liverpool and the Edinburgh Royal workshops. Also, since Jack Anthony was loyal and still under contract, Collins retained the pantomime season at the Pavilion Theatre, Glasgow. Collins was able to negotiate other less profitable venues for seasonal productions but this was an ever contracting market and the writing was very much on the wall.

It was into this scenario that Randle was introduced into the business in 1951 at age 17 having completed and gained his Highers.