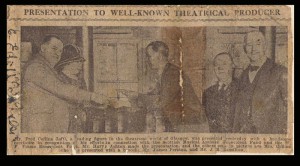 Things were going extremely well for Fred, the ‘little orphan’ who frequented the Halls. He was asked to be Founder President of the Scottish Musical Artistes Benevolent Fund and served for over six years until his death. The mission was to help the unfortunates of the profession which could only be done by appealing to the public for donations. 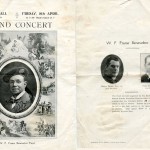 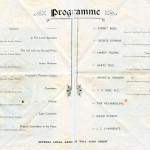 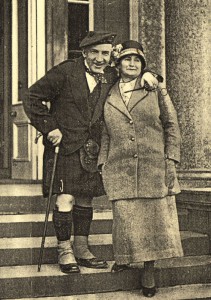 Although one hears stories of Sir Harry Lauder being ‘a mean Scot’ Fred found this unfair as Sir Harry gave a tremendous amount of time and money to this cause and others. In 1919, when Sir Harry received his knighthood, The Scottish Musical Artistes’ Benevolent Fund organised a luncheon in his honour presenting him with an illuminated address from his old-time associates. When acknowledging this, Sir Harry stated it would be one of his greatest treasures quoting the very old proverb ‘East, West – Hame’s best’. He promised to give a concert in aid of the Benevolent fund. Two years elapsed before he returned to his native soil but he did not forget the promise he had made and appeared in the St Andrews Halls, Glasgow. As a result, the Benevolent Fund benefited to the extent of over £600. Later, Fred organised another matinee which was to take place in the Alhambra, Glasgow. Tickets were selling badly despite an excellent programme so he immediately got in touch with Sir Harry who was in Edinburgh receiving the Freedom of the City. He had cancelled all public engagements on account of the death of Lady Lauder but he agreed to appear and the result was another packed house.