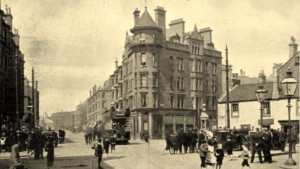 Fred Collins didn’t really exist. It was a stage name – his real name was James Nelson. James was born in 1876 in Duke St, Glasgow, within sight of the prison. His father was Andrew Nelson, a police sergeant and his mother was Mary Ann. James had two elder siblings, Mary and Andrew and a younger sister Adena. Their father died when James was only one year old and his mother died just nine years later, leaving them orphans. James’ elder sister Mary became guardian to her siblings and when James left school at 13 she supported him through a six year apprenticeship as a house painter. When James was just about to become self supporting, his brother Andrew died. It was certainly a tough start for the young ‘Fred Collins’. 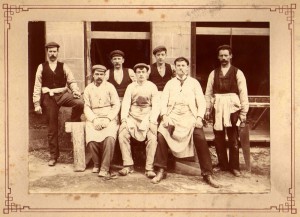 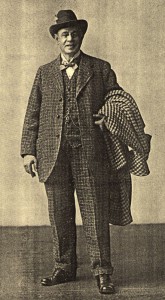 From his childhood Fred was stage-struck. His weekly enjoyment was to visit the Good Templar’s Harmonic Association Concerts. ‘The Bursts’ as they were called, were held in three of the principal Glasgow Halls every Saturday evening, the Wellington Palace, the Albion Halls and the Bridgeton Institute. On payment of 6d Fred received a big ‘poke’ of pastry and as many cups of tea as he could consume whilst the service lasted. The same company appeared at each of the halls and were conveyed there by horse cab. Many well-known artistes appeared and amongst others, Fred enjoyed watching Harry Linn, Pat Feeney, Bessie Bonhill and W F Frame, an established Scots comedian known as ‘The Man You Know’. 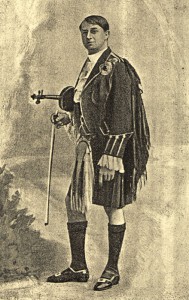 The first music hall Fred ever entered was Frame’s Concert Hall in Dunlop Street and he formed a very close association with Willie Frame, the forerunner of Sir Harry Lauder and Mackenzie Murdoch, both of whom Frame groomed for stardom. Mackenzie Murdoch ‘Mac’ won his way to popularity largely by his skill as a violinist but it was his song ‘Hame O’ Mine’ which immortalised him. He was billed by Frame as ‘The Scottish Paganini’ and toured in the early days with Harry Lauder before striking out on his own. Fred Collins had the honour of being one of the committee who organised the erection of a monument to his memory in Sighthill Cemetery at the unveiling of which Sir Harry sang a very moving rendition of ‘Hame O’ Mine’. Sir Harry kept the song alive by using it in his act for the rest of his years.