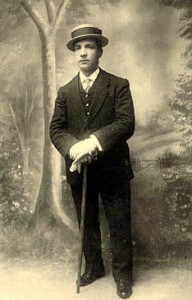 Stageland became more and more appealing to Fred and at the age of 17 he decided to try his hand at song writing which he had dabbled in since childhood. By the age of 20 be had written many successful songs for many top artistes of the day and became a compositor with Daniel Barr (of “The Poet’s Box” fame), who published a fortnightly song sheet called “The Professional’. This sheet was for the benefit of theatrical professionals and featured news and gossip of the day. He became so engrossed that eventually he was offered a partnership in the business and over a relatively short period it became well worth a visit from artistes requiring new material. He wrote over 300 songs and met up with a young miner from Hamilton who was singing in amateur concerts and on the lookout for material called Harry Lauder. Lauder was closely following W.F. Frame and on one occasion entered a competition and was ruled out by the judges who felt he was too good a copy of Frame! Considering he was being groomed by Frame perhaps this was not too surprising but Lauder never quite forgot the judge’s decision. At this time, at another such amateur competition, Lauder won a silver medal being beaten to the gold by none other than J.H.Anthony (father of Jack) even in these days Lauder had his crooked stick and the proverbial Tam O’Shanter bunnet!

Lauder and Fred became lifelong friends and toured together on many occasions. Fred wrote many of Lauder’s earliest songs and later when Lauder became a promising Scots Singer/Comedian (under his name on the day bills was the sub-title ‘Frame’s Double’) he was singing a song Fred wrote specially for him entitled ‘The Actor’s Wife’ although Fred stated he hardly recognised it as one of his own creations! 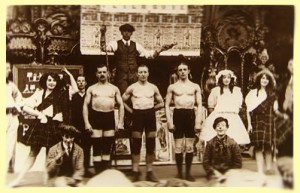 Although successful, Fred found song writing was not particularly lucrative, as in those days Artistes, on purchasing songs for which they paid between £1 and £5 could legally put their own names on them. So it was difficult for the original writers to make an impact. At that time Boxing Exhibitions were storming the Halls and he decided to train to become a professional boxer. He was doing fairly well but very soon decided it was not for him and it would be best to turn his attention to a more profitable and less painful branch of  entertainment…