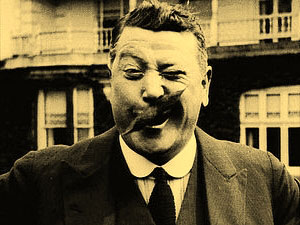 After many months of hard practice Fred became a comic/singer and began to tread the boards with an Irish partner calling themselves ‘The Two Emmets’ – Irish Comedians and Dancers’.  Their first engagement was a touring pantomime in Scotland and the entire company totalled 16. Nevertheless they were ambitious enough to play the Chief Robbers in ‘The Forty Thieves’. Most of the places the Emmets visited were one-night stands and the tour lasted 14 weeks. It proved very successful and, full of confidence, they accepted a booking to play at the Sadlers Wells Theatre, London. Unfortunately, because of their strange accents, the east-end, cockney audience couldn’t understand them and they finished the same evening. On the same bill was another Glasgow boy mimic, the world famous Harry Tate.

With nothing to lose The Two Emmets travelled north playing smaller music halls in Nottingham, Leicester and Birmingham until they arrived in Dudley. They were booked to appear at the Theatre Royal, Ilkeston the following week and decided to stay with friends in Wolverhampton only a few miles from Dudley. Then their troubles began. Instead of taking their baggage, they arranged with the Theatre Porter to put it on a train which they would join at Wolverhampton. Unfortunately they never saw their baggage again, it was assumed to have been stolen en-transit which meant they were unable to fulfil their engagement in Ilkeston. With only a few shillings between them they decided to head to Liverpool where they boarded a steamer as stowaways to Glasgow, Fred was unable to tell the true state of affairs to his relatives but his sister suspiciously declared she would always stick by him provided he made his living by honest means.  In order to try again he drew on his talents as a songwriter and soon had enough funds to renew the wardrobe of ‘The Two Emmets’. With some difficulty they received a new offer to tour Scotland for the princely salary of £2.10 (joint) per week (25/- each) but within several months his partner fell ill and ‘The Two Emmets’ ceased to exist. 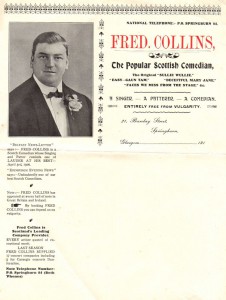 Yet again Fred returned to Scotland and eventually became a Master Painter. He paid a return visit to Wolverhampton where he married Annie Randle, a young lady he had befriended when playing the halls in that area. He and Annie came back to Camelon, near Falkirk and for two or three years he worked as a painter trying hard to forget the stage. They had a son, Horace Horatio and a daughter, Edith.  Due to the Boer War, his little business was badly hit by rising costs and he decided to succumb once more to his love of the stage, but this time as a solo act. He toured the UK as a Scots Comic and Singer and became known for his ‘Sullie Wullie’ character. One of the songs he wrote for his act was ‘I’m the Saftest of the Family’. A song Sir Harry Lauder perpetuated until his death in 1950. Jimmy Logan continued to sing this song until he died in 2001. 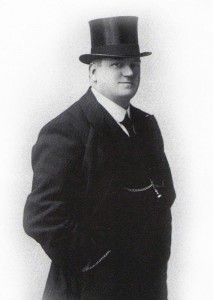 Fred was particularly successful playing at the Fife Coast venues and on a return visit to the Town Hall, Bo’ness, decided a change of programme was required and appeared for the very first time in full evening dress telling funny stories in addition to playing piano and singing popular songs of the day under the stage name, Alfie Cowie.  After several tours throughout the UK and Ireland, success came quite unexpectedly when he signed contracts extending over two years to appear at the principal London and provincial Music Halls. He was billed as ‘The Representative Scotch Comedian’. Eventually dates became due at the Queen’s and Tivoli Theatres in Glasgow and Fred decided to rearrange his act and change his name to Fred Collins which became the family name. 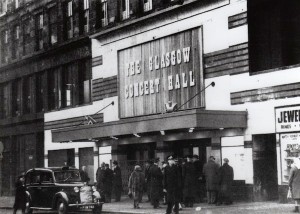 Around this time it became the ‘in thing’ for entertainers to change their names in the hope that they could further their careers i.e. Johnnie Herbertson became Jack Anthony etc, in the hope the chosen name would look better ‘in lights’. Future generations of the family have since never been known as Nelson but as Collins.