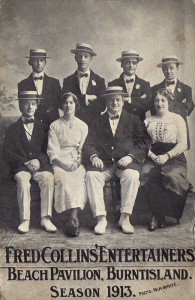 Fred Collins became a pierrot entertainer and appeared all over the UK. As time progressed, he started to organise groups himself and to arrange bookings. He also became deeply interested in things concerned with human welfare.

Around this time he met a man who was running skating rinks very successfully and they formed a partnership with Fred taking over the rights for entertainments at Inverness. In due course, he found his new partner was an adventurer and immediately split with him and took over the sole responsibility. From then on he never looked back. He produced shows under the name ‘Alfresco Entertainments’ designed to appeal not only to the townspeople at seaside venues, but aimed at attracting summer visitors. 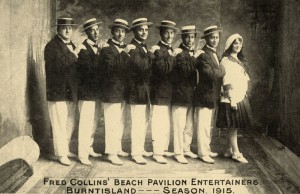 At that time there were lots of different groups of entertainers who rented halls, bandstands, even outdoor sites, to perform in and “Alfresco Entertainments” reached a high standard. Mainly because as an entertainer himself Fred had worked under conditions he knew could be vastly improved upon to the great advantage of everyone concerned. For 4d patrons were entertained at Kinghorn, Fife on a site near the seashore with cliffs on either side and it proved such a success that a deputation from the Town Council of Burntisland persuaded him to transfer there for more space and comfort. 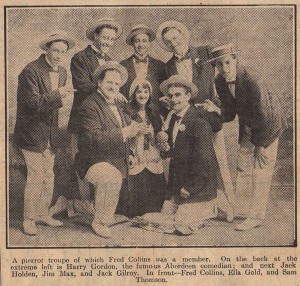 In 1913 the company included the Aberdonian comedian, Harry Gordon, and when in 1914 the First Word War broke out, the company motto became ‘business as usual’. Fred raised money for war funds and made sure the military who were barracked in the Burntisland District were well entertained by building a Pavilion costing several hundred pounds (around £50,000 today). 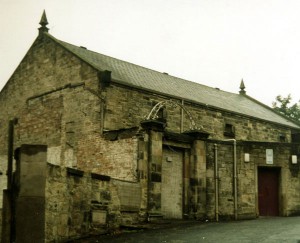 As time progressed, the management side of the business greatly increased.  He worked hard trying to encourage other town councils to welcome men with capital who could invest it in entertaining the visitors as he had done. He had seen the success of many of the English towns which he greatly envied such as Blackpool which to this day still has its pier shows. He continued to appear at many venues, Carnoustie, Millport, Rothesay, even as far away as the Highlands and Islands, but he was most successful in Burntisland, where he spent ten years, travelling to and from Balgrayhill in Glasgow. 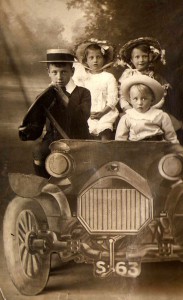 The family grew and another daughter, Annie and son, James Alfred Junior, (known as Pete from his schooldays) were added. In later years he didn’t take part in the performances but never missed a show which kept him in direct touch with the patrons.

During his many tours of the UK he had become aware of the appalling conditions under which out-of-work artistes had to seek work. Each town or city would have several public houses, referred to as ‘professional houses of call’ – although the average ‘pro'(Professional Artistes) was by no means a pub hunter. There was Jones Corner at Leicester Square in London. The Clock Tower, Liverpool and in Glasgow it was Lauder’s Bar at the corner of Sauchiehall Street and Renfield Street. Pros would visit these venues thereby forming a great attraction for the general public and often excellent business resulted. Fred recalled one theatrical Manager interviewing his clients in a public bar and the artiste who bought the most beer got the best contract. Fred frequently lobbied The Variety Artistes’ Federation to have some form of recreation rooms in each town to help alleviate this situation. Over the years things improved greatly after the Theatrical Employees Registration Act was passed and conditions became much more standardised. Chorus troupes were only engaged by Agencies subject to a private rehearsal and they worked for a fair salary, which at that time ranged from £1-3 weekly, with every prospect of rising in the profession. Prior to this Act any adventurer could supply a dancing troupe, pay them a pittance and live very well by taking a ridiculous fee out of the profits. The girls were much maligned and some who were conscientious and hardworking had to stand a fair amount of abuse.