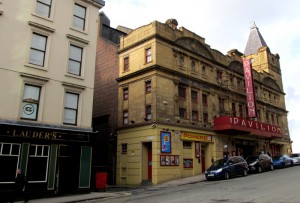 The Fred Collins Variety Agency office next door to the Pavilion Theatre, Glasgow

Then came an important juncture in Fred’s life. His agency work increased to such an extent that he decided to look for office premises and within a short time The Fred Collins Variety Agency was established at 115 Renfield Street, Glasgow. The offices were strategically placed above Lauder’s Bar, which is right next door to the Pavilion Theatre. He engaged a manager, a typist and an office boy. At first he met considerable opposition, as people in the business had heard of these Agents in England and word was put about that Agents were mainly sharks and rogues. However, he worked long and hard, sometimes accepting engagements to appear on stage at half his salary in order to make the business sound. 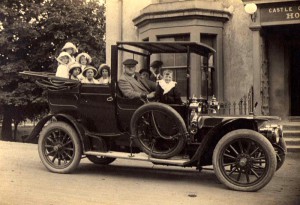 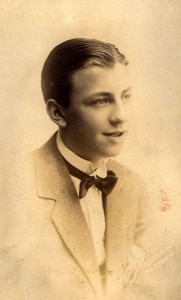 The family moved to Hill Street in Garnethill which was an area of Glasgow where theatricals looked for digs and bought a very impressive 20 horsepower motorcar in which Fred drove along Sauchiehall Street attired in top hat and tails and looking very impressive – even though he probably didn’t have a lot more than an average wage earner – but it put him in the limelight which was the object of the exercise. In 1915, his eldest son, Horace Horatio Collins joined the business at the age of 14 and gradually Scotland’s first successful Variety Agency was established. 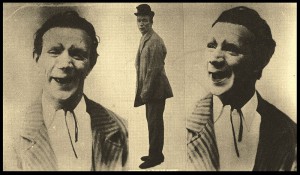 The Collins’ travelled around assessing ‘raw material’, from Wick to Plymouth, which with care and dressing might develop into the finer article. Budding stars realised a contract for work with the Agency and could channel their talents into the most successful venues as Fred & Horace built up the booking rights for a considerable number of Scottish theatres. Around this time Fred had his first meeting with the great Scottish Comedian, Tommy Lorne, who was working with a partner, the act being called Wallace & Lorne. 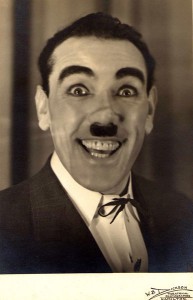 On his return from 4 years’ active service, Fred gave Lorne his first booking in pantomime in Edinburgh which proved a great success. He wrote songs and material for him and was proud that “Tommy Lorne became one of Scotland’s greatest pantomime comedians”. Later Lorne went into the management side of the business himself and ran his own revues. It was Lorne who secured the services of another Glasgow boy, Dave Willis in 1929. Later, under contract to Collins, Willis went to the top as a panto comic – “with a little careful handling he became top-rank” was how Fred Collins put it! 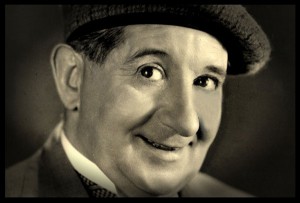 The Collins Agency provided work for hundreds of artistes in Scottish Variety. Acts were imported from as far away as America. Father and son worked tirelessly, Horace proving a tremendous asset to his father. They were at their desks from 7.30am until 6.30pm then they would visit two or three theatres evaluating the various acts and then return to the office at 11.30pm to dispatch the mail before midnight. The Agency was doing a great amount of business throughout the week so weekends became the time to visit managements. During one of these journeys, Fred visited a booth occupied by a touring theatrical company “a penny geggy” as they were called in Glasgow and saw an artiste who deeply impressed him with his comic songs. He was the celebrated Scottish comedian Will Fyffe – and he was immediately booked for £6!

An early visitor to the Agency was Jack Buchanan who asked if Fred would visit his show which was appearing at the Panopticon, Glasgow. Another person associated with Fred at that time was Mr George Urie Scott who opened a small hall in the east end of Glasgow for which he gave the Collins Agency the exclusive booking rights. Eventually George Urie moved over to Picture Palaces but he ran the Pavilion, the Empress and also the Dennistoun Palace Dance Hall, Glasgow. He remained a close family friend until his death in the 1960’s.

The agency had the booking rights for many theatres throughout Scotland and artistes, far too numerous to mention, became ‘stars’ in the profession. Many old billboards from these early days are still around and have been reproduced in various books and journals.

Revues could tour without leaving Scotland for almost a year by visiting towns throughout Lanarkshire, Kilmarnock, Kirkcaldy, Methil, Montrose, Arbroath, Falkirk, Alexandria and Clydebank, proved very popular. In the early days of the Collins Agency, their best known productions included ‘Guess the Title’ and its follow up ‘Keep Guessing’. The latter was so successful it ran for over three years and then moved on to London for a 14 week season. This was one occasion when the Scottish element was appreciated as the London audiences loved the ‘Highland Glen Scene’ with the Six Lauder Lassies and famous pipers and highland dancers. Then came “Say When” which was the first time a jazz band was toured. “The Manhattan Melody-Makers” originated from Glasgow and went on to be very successful on radio.