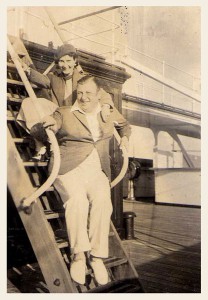 The Collins’ toured Europe in search of novelty acts for their revue shows and one of the most unusual they met up with was in Brussels. This was Albert Johan Kramer who was a Dutchman billed as “The Dutch Giant” by a touring showman but owing to labour difficulties, the tour was not meeting with much success. 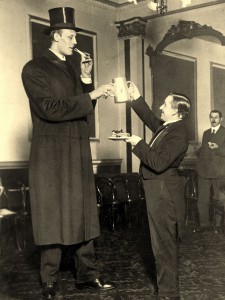 “Lofty” as he was renamed, was reputed to be 9 feet 3 and a half tall and it took 8 and a half yards of material to make him a suit. To make himself look even taller, he wore a frock coat and top-hat together with thick-soled shoes because he was actually ‘only’ 7 feet 9½ inches. His breakfast consisted of two soup plates of porridge, ten soft boiled eggs, five chops and ten bread rolls all washed down with eight cups of coffee. He smoked on average 50 cigars daily. 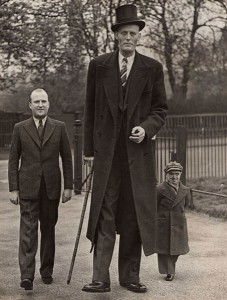 Pete Collins (5’8) with Lofty and Seppetoni

He had been partnered with a little man called Josef Fassler billed as ‘Seppetoni The Swiss Midget’ at 3 feet 6 inches. He was reputed to be the smallest man in the world. Seppitoni would make his entrance to the stage carried in Lofty’s attaché case. Strangely enough Lofty married Seppetoni’s sister and they ended up brothers-in-law! The Revue, entitled ‘The Big Noise!’ toured every town of importance in the UK.

Although arranging travel for Lofty was difficult and costly as he required special railway carriages. Lofty was paid a very high salary for the three years the Revue ran and on his return to Holland, settled down as a hotel proprietor. This revue was later retitled “Would you Believe It” the cast being costed to suit the Box Office and capacity of each theatre played.