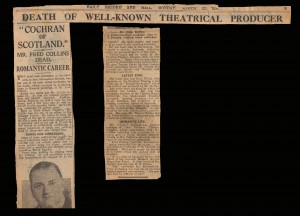 Throughout the 1920’s and 30’s the Fred Collins Variety Agency had become well-established and was famous for it’s productions all over the country. There was a staff of around six working extremely hard for long hours and the family moved to Pollokshields. When Fred’s two daughters Annie and Edie, contracted TB they were sent to Tor-Na-Dee nursing home in Aberdeenshire to recuperate. It was whilst on a train travelling between London and Aberdeen to visit his daughters that Fred first felt a pain in his leg. Initially his doctors were not alarmed but Fred’s health suddenly became worse and he was moved to a Glasgow nursing Home in March 1931. Within just a fortnight, at the age of 54, Fred developed a blood clot and died. 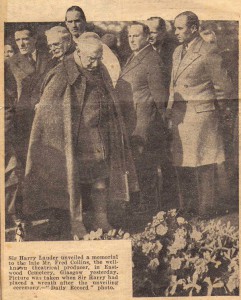 Not only was he mourned by his family but also by the entire theatrical profession. The headline announced ‘Cochrane of Scotland, Mr Fred Collins is dead’. Sir Harry Lauder was instrumental in organising the erection of a memorial tombstone on behalf of the Variety Artistes Benevolent Society at Eastwood new Cemetery in Glasgow. 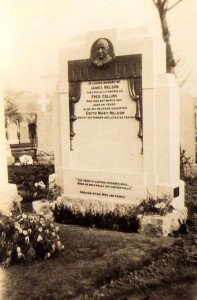 Sadly most of the embellishments, including the bronze bust of Fred, executed by Benno Scholtz, the eminent Glasgow sculptor, were stolen by vandals in the mid 1970’s. The family was advised that it would be folly to restore the stone as any precious metals would only attract a repeat performance. However, the original stone still remains.

In Fred’s autobiography he stated

“I cannot do better than repeat the words of one of my earliest song successes:

“Dae as ye’d like tae be done tae yersel,
dinna be hard on a fella that fell.
Never dae ocht that’ll gar ye regret,
let your motto aye be forgie an’ forget” 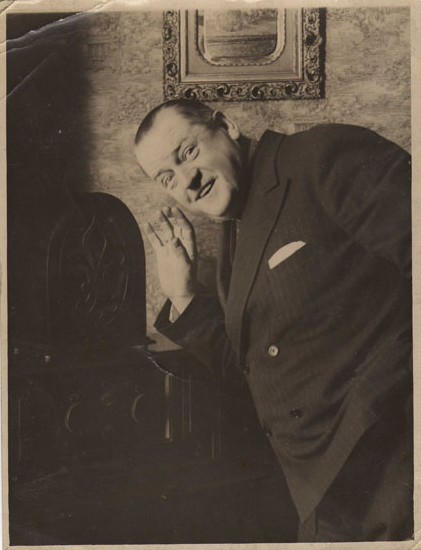